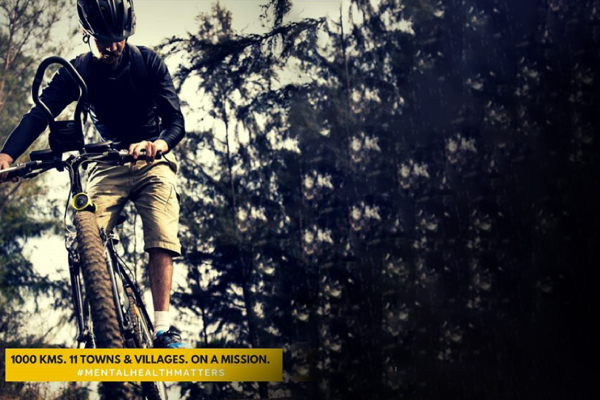 How Rohan Sabharwal copes with suicidal thoughts by helping others

Leaving him alone, in a room, with his thoughts is like leaving a boiling kettle unattended. Eventually, the lid has to let off steam. When the trembling water reaches the brim, the bubbles simmering just to escape the corners of the lid, the kettle starts shaking, fervently. It cannot contain the ferocity of the liquid, and it bursts. Now replace the kettle with a human mind. Replace the water with thoughts.

When Rohan Sabharwal found it difficult to contain all his thoughts in his mind, he marched straight to the kitchen, took a knife and slashed his arm multiple times. “It’s like letting off air,” he says. Having lived with borderline personality disorder for most of his life, Rohan feels that everyone is going to abandon him, a common trait of the disorder. “I don’t have anyone to talk to except for the person I am in a relationship with at any given point in time. The trust is not like, ‘you’re going to cheat on me’, it’s more, ‘You’re going to abandon me in the worst way possible,’” he says. There is another aspect to this, the disorder borderlines on psychotic and neurotic, which can include having obsessive thoughts. “Now I do repetitive things. For the last eight years, I’ve been watching Big Bang Theory on repeat. It’s the only thing that gets my mind off things.”

In an attempt to find another activity to pursue and clear his mind, Rohan took a cycle and went on a ride from his home in Deonar to Bandra, and back. He was hooked to the exercise, which was helping him manage his mood. Soon it became a hobby that he enjoyed, and decided to take upon a long distance ride. He thought of using this opportunity to bring mental wellness concerns of rural India to the fore.

He found that there weren’t enough medical facilities and trained professionals to deal with issues concerning mental wellness. His realization is to treat the issue at a micro level. His experiences will come together in a documentary that will feature his interactions with people across his travels. He proposes a system of deinstitutionalization of mental wellness. Leading by example from a small town in Italy called Trieste, where doctors visit people’s homes, he wants a similar system in the country, but with funding from the corporate world. “We have a huge population and how many mental health hospitals can you going to put up?” he argues, adding, “A person feeling exactly the same way as me and who cannot afford consulting a professional might be miserable, and I want to reach out and extend help to them.”